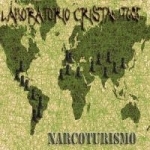 What we have here is a Death / Grindcore band from Italy singing mostly about drugs (such as their heroes Brujeria). Their bio states they cover topics such as death, violence, sex, Satan and perversion. I’ve just learned some cool Italian words as I hear the chant of “ganja” quite prominently throughout the opening title track and “zombie” in ‘World War Zombie!’ The first 10 tracks are sung in Italian with a bonus disc of the same songs sung in Spanish. The songs sound quite similar in both languages, not that there’s anything wrong with that! The trio offer quick bursts of mid-paced Grindcore – think what Brujeria or Napalm Death might sound like if they smoked lots of pot. “Narcoturismo” doesn’t invent any new genre of Metal but it is gasp! melodic and well produced. If it ain’t broke, why fix it? If you don’t mind your Metal mid-paced with added mystery (very little info is available on the band) give them a spin. Good stuff! www.myspace.com/laboratoriocristalitos2