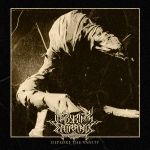 LABYRINTH ENTRANCE is a Polish one man band with Adam Ronij aka Hunger, handling all instruments and vocals and “Deplore The Vanity” is his sophomore album. He also released an EP with his previous band, HORROR OF NATU and he is a member of the well-known Death / Black band STILLBORN. Well, LABYRINTH ENTRANCE mixes first and second wave Black Metal, going from slow, march-like parts to full-on speed attacks and everything in between. I do think that, particularly, the vocals stand out, since his style is more a loud grunt than the typical screechy / high pitched vocals in Black Metal. Nevertheless, the outcome is brutal, heavy and it also incorporates that Death Metal aspect, which I think adds another dimension to the sound. The songs are full of melodic segments, tremolo riffs and open chords. Some of the songs just pummel away with lots of aggression, while the slower ones keep the album balanced. The bass and the drums provide a perfect and varied backbone to the guitar work, which is sharp and precise. I do think that Adam comes out as a gifted musician. His excellent performances in each instrument definitely shows that. Amazing all the way through. Production wise, the album has a pristine mix, which is amazing since the instruments have that raw and uncompromising sound. There is an organic feel to it, so you don’t get any of that unbearable overproduction so common these days. The guitar and bass tones are thick and really dense when they hit the low notes. And the drums pound their way through 50 minutes of the really well crafted music. The instrumental passages between songs give the album a much needed breath of fresh air in between the chaos. And all across the album, there is this looming, freezing cold atmosphere that evokes a bit of nostalgia, given the clean guitar instrumentals. All in all, “Deplore The Vanity” doesn’t land that far away from other Polish bands playing this style of music. But is it a really solid and massive album. I am impressed by what Adam has done here and how he channels his vision through his music and his performances. Recommended for fans of both Death and Black Metal. You can support the band at www.facebook.com/labyrinth.entrance and you can get their album from their label at www.facebook.com/godzovwar