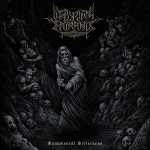 The Polish underground scene always seems full of new acts ready to emerge from the darkest profoundness of the hell. LABYRINTH ENTRANCE is the alter ego of Hunger, who is already member of bands like STILLBORN and HORROR OF NAATU. "Monumental Bitterness" is his debut album, a manifestation of his personal taste and flair. As for many of these one-man bands, the songwriting process is supported by edited drums, even though, sometimes, they have high-quality sounds. It is, in my opinion, a denaturalized way to record the final product promoted like Black Metal, even if I acknowledge the usefulness in the pre-productions stage and it’s the only option due the lack of available drummers. Overlooking this perspective, the music is dark and depressive. The titling of the songs complies with the ancient poem form, so every track is called ‘Canto’ and the whole lyrical work is to interpret with a central theme. The opening ‘Canto I’ extensively reveals an evocative setting with absence of light, mainly by slow rhythms and gloomy melodies. The instrumental ‘Canto II’ creates some tension before the following tracks, ‘Canto III’ and ‘Canto IV’, which don’t keep unexpected changes in the sound of LABYRINTH ENTRANCE. More generally, this kind of Black Metal, despite some good arrangements and a reasonable amount of ideas, is too catchy to blow me away, and when, on the concluding ‘Canto V’, it becomes more aggressive, the drums sound really fake in the fastest parts. I archive my curiosity about this band for this time. You can easily give a chance to them, check www.facebook.com/labyrinth.entrance and www.godzovwar.com