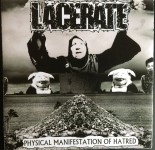 This is not your typical one-man Grindcore band! Even though it looks like that on the first sight. But, no! LACERATE aren’t fulfilling those boring clichés on their first EP "Physical Manifestation Of Hatred". And it’s neither that this band is from Costa Rica, nor the political lyrics of band mastermind Alfonso. It’s the fact that LACERATE have something special. There’s a distinct Hardcore vibe present in this pretty old-fashioned Grind that often reminds of stuff like early PUNGENT STENCH and even some old Stenchcore bands. On the other hand you’ll find some rather melodic Death Metal twists like in ‘Disposable’ or pure Death grooves like in the opening ‘Burnt’. Another thing I like about "Physical Manifestation Of Hatred" is the variable style of the vocals, due to the fact that any of the nine songs is sung by another singer. I personally like the very CARCASS influenced vocals of Frankie Chemicide in ‘Non-Equality’ that fit to the song itself in a perfect manner. Another song that really caught my attention is the very Hardcore based ‘Compelled To Obey’. But don’t get me wrong – the whole EP delivers very delicious and variable Grindcore with a good sense for writing songs. So, Grindheads, it would be very worth while to check out these pages: www.facebook.com/laceratecr or http://laceratecr.bandcamp.com