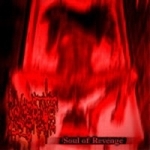 A couple of years back, bands of this kind still would’ve been considered as pure noise by many… But nowadays not only the overall acceptance of brutal music has become a lot stronger, the bands themselves also improved quite drastically. While older releases often heavily suffered, either from a poor sound or the lack of playing abilities (mostly both!), bands that are currently releasing their material are without a doubt way better in every aspect! That also goes for Thailand’s extreme four piece LACERATE whose brutal grinding Death assault (despite its overall extremity) still proves a lot of musical talent (just listen to some of the amazing stuff performed by Nakarin, the bass player!). This MCD features their self-titled 4 song demo from 2000 as well as a previously unreleased, new bonus track. The band is mostly blasting through the songs with an unbelievable, uncompromising intensity, comes up with two different vocal styles (the typical deep guttural and the over-the-top hysterical screaming) and still convinces in terms of a good songwriting and a decent production. This is very brutal shit, but performed with a lot of class and the right feel for grinding insanity. I just don’t get why the newer song on here is of a worse production quality than the demo material… Available for 8 Euro (ppd. in Germany) / 10 Euro (Europe / overseas – without plastic box) from the newly founded German label: Premonition Records, c/o Michael Oelschlegel, Martin – Luther – Str. 19, 95119 Naila, Germany