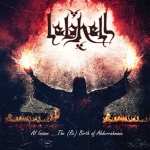 Before listening to LELAHELL’s debut album "Al Insane​.​.​. The (Re​)​Birth of Abderrahmane", courtesy of Horror Pain Gore Death Productions, I did some research. This Death Metal power trio hails from Algeria. I never before had to listen to any band from that country. Past this "exotic" feature, I was pleasantly surprised. LELAHALL incorporates to their music a lot of influences. Mainly, I can hear some MORBID ANGEL and a mid-era HYPOCRISY. Furious Death Metal, that varies between doomy rhythms, eastern melodic passages and really intense passages. The album is always changing and that kept me interested through the first full listen, even though I despise the use of the infamous "gravity blast". At least these guys don’t overdo it. Production wise, the drums sound too triggered for my taste and they lose punch when going into the aforementioned drum patterns. Anyway, there is riffs a plenty here, with the bass and the drums adding a lot of atmosphere when needed. The guitars have a thick tone, the bass is clear and balanced. And the vocals. They deserve their own stuff. Anywhere from a deep growl to a Black Metal type screams. And those vocal variations help a lot of the songs when it comes down to liking the band or not. I think the eastern European influence is undeniable. Some parts reminded me instantly of ORPHANED LAND with an attitude. A bunch of riffs and different rhythms work for a certain period of time but then they start getting monotonous. This album is definitely a powerhouse of modern Death Metal done the right way. It has the spirit, so to speak, of any of those classic albums. Just don’t expect any classic sounding Death Metal. This is not it. Now, in my humble opinion, besides some details, the band needs to work on their writing skills a little. Besides that, everything has been done the way it should be. You can contact the band and the label here: www.facebook.com/lelahell, www.horrorpaingoredeath.com