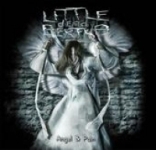 Russian sextet LITTLE DEAD BERTHA started out in 1994 as Gothic / Doom Metal act but ever since the band was obtaining some other harder sounding Metal elements into their sound over the years, becoming a symphonic and melodic sounding Death and Black Metal act that they are nowadays. "Angel & Pain" is LITTLE DEAD BERTHA’s 5th full-length studio album in order – and having not heard any of their previous works before, I was kinda stunned by the band’s latest work… momentarily at least, I mean. The musicianship in the band is on a very professional level overall; every band member in LITTLE DEAD BERTHA seems to know her / his position in the line-up, and what other members expect her / him to do in terms of getting each members’ input fully used for the advantage of the band (there’s 2 females and 4 males in the current line-up of this Russian act). The band’s music flows pretty nicely as a matter of speaking – and all those a little bit more symphonic arrangements that they have created for this record, have been done well, I think. LITTLE DEAD BERTHA ain’t any "little little brother or cousin" of Finland’s WINTERSUN though but I believe the fans of WINTERSUN may even like this Russian act quite a bit since there’s quite a lot of similar symphonic elements used on "Angel & Pain" that WINTERSUN employ within their songs on a maximally ridiculous level. LITTLE DEAD BERTHA’s stuff is however, much easier to approach; they keep it simple enough, avoiding to go totally pompous and over-the-edge. Once again it needs to be said that if they had shortened the albums content to 45-50 minutes only, it would have been an optimal length for the stuff like this, making the record to sound tighter and more enjoyable, I believe. Over an hour of this type of stuff is perhaps a bit too much, as a listener may loose his / her concentration while spinning this lengthy albums time after time. Nonetheless, a decent release all in all. Band: www.myspace.com/ldbertha, label: www.msrprod.ru or www.myspace.com/msrprod