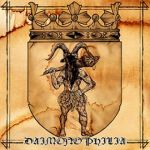 Devilish Black Metal from the land of the thousand lakes. LORD OF PAGATHORN is a fairly old band, formed in 1992, releasing only a few demos and an EP until the first full length "Nekros Philia" in 2014. The album that marked my first encounter with the band, though not an album that made an lasting mark on my mind. We are now writing 2018 and the band is ready with their second full length, this time released on Finland’s finest, Woodcut Records – an album that marks quite a progression since the 2014 effort. We are getting a heavy dose blazingly cold darkness, well written and catchy, yet a tad raw but still melodic songs, chainsaw riffing and well made rhythm patters, all entertwined in a chaotic, eerie and dark atmosphere. Add hellish vocals on top of that, and the journey through the nine gates of hell has begun. Mesmerizing melodic progression, great shifts of both pace, rhythm and atmosphere, especially the overall dark and lifecrushing atmosphere ties the work together and makes it strong. A well made album that has sparked my further interest in the band, they have opened the gates for a great journey, if they can continue progression without losing the black mark they have set with this album. "Daimono Philia" doesn’t bring much new to the table, but builds on the nineties great Scandinavian Black Metal scene, and adds a twist of their own, a healthy dose nostalgia delivered fresh and hardhitting. More info beyond the realms of dead: www.facebook.com/msilihporcen, www.woodcutrecords.com