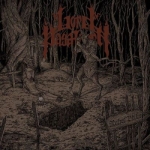 For a band formed in 1992, 22 years are quite a lot of time for releasing the debut album. Obviously there was a halt in this long time. When the band decided to arise from the dead, they did it in a quite similar style they were doing in the beginning, playing mystical Black Metal. Their return happened in 2010, and I had heard a few songs from a demo released that year. Well, things remain the same although they improve in many aspects for this debut album. The music style from this band from Finland is which reminds more of bands like early ROTTING CHRIST, early MAYHEM and Black Metal era DARKTHRONE, with a quite subtle yet noticeable Folk / Pagan element. The production values are quite good for the music style, and the musicians are able to deliver a very good execution. Mostly fast paced with wicked melodies lurking in the shadows, and with quite very good vocals, LORD OF PAGATHORN delivers an album which mixes some instrumental interludes and presents the songs as chapters as if they were presenting a history within. At times I have the slight impression that they use almost the same speed on all songs thus making them sound a bit similar between. Formed by musicians that had experience in some other bands like DESOLATE SHRINE, MAPLE CROSS, URN, THE TRUE BLACK DAWN among others, you can expect a mature offering if maybe a bit repetitive at times, but very well done. www.facebook.com/msilihporcen, www.woodcutrecords.com

Julián “The Beast In Man” Núñez

Julián "The Beast In Man" Núñez