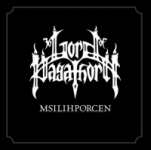 LORD OF PAGATHORN, originally keeping the band’s headquarter in the north of Finland, Rovaniemi, has been resurrected back from the dead – after 16 long years. This 2-piece Finnish Black Metal band that recorded their semi-legendary debut demo "The Chaos Spirit Among Us" in 1994, has become a 3-headed monster since the reformation – and also relocating to the capital area of Finland during those 16 years of the band’s absence. There’s still Corpselord left (on guitar and vocals) from the band’s early line-up, two new hired guns including Hellwind on drums and vocals and Sedit on bass. With this line-up, the band has recorded a new 6-track demo, titled "Msilihporcen" – and one doesn’t have to own a huge brain capacity of Dr. Einstein to figure out what the demo title actually means. What comes to the music itself, the demo represents one hell of a piece of frenzied, violent yet melodic enough Black Metal that mostly manages to throw me back to the times when such Swedish acts of pure evilness as NECROPHOBIC, UNANIMATED, DISSECTION and host of others, were about to start their careers in their early years. The vibe and feeling are definitely the same – and if you have just ever been a fan of those aforementioned bands – and are aware of all cool things what happened in the Swedish underground Metal scene during the late 80s as well as early 90s, let me crucify you if you won’t check this out. "Msilihporcen" contains three different chapters from the band’s forthcoming "Nekros Philia" theme album (to be released sometime in 2012 on Woodcut Records), really making me hungry to hear more stuff from this diabolic sounding Finnish Black Metal horde. LORD OF PAGATHORN’s Black Metal has this mysterious yet very magnetic aura around its music, capturing your mind and soul – and placing its listener into a whole different, sinister and darkened underworld during the concentrated spins of the disc. This so-called ‘chaos-spirit’ is still tightly among them music-wise, which proves while the guys have aged proudly over the years, they sound no less tamed or less relentless than what they did some 16 years ago. On the contrary, it seems like the older they have gotten, the more vicious and angrier they have become, if this LORD OF PAGATHORN’s comeback 6-track effort can just work as any indicator for that. This is killer stuff in every sense of the word – and undoubtedly LORD OF PAGATHORN’s ravishing grimness should apparently appeal especially the fans of heydays of Swedish Black / Death Metal scene that really started to sky rocket in the early 90s. So, hellcome back boys (or old fucks) in 2011 Anno Bastardi. www.myspace.com/lordofpagathorn