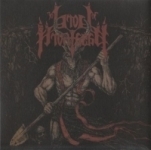 ‘Oh hear those thirteen silver coins, we are all in conspiracy with Judas…" In conspiracy with Satan would probably fit teeny-weeny better in LORD OF PAGATHORN’s case this time. Here’s a brand-new 7" record from this Finnish semi-legendary Black Metal outfit, titled "Shine Through My Scars, Morning Star", which obviously works out as some sort of a promotional item what could well be expected from this vicious beast’s forth-coming debut album "Nekros Philia", to be released later this year on Woodcut Records. The title track of the EP, ‘Shine Through My Scars, Morning Star’, is a brand-new LORD OF PAGATHORN track – and it truly nails our ears harsh-tightly into one mega-sized pitch-black crucifix. It’s one utterly heavy and crushing torpedo that sinks all the holy and living on the surface of the earth without warning, sort of offering this ultimate ‘calm-before-the-hellish-storm’ effect – and leaving all the poor and weak minds to wait for the final Armageddon. Another song on this 2-track EP, is a cover of one of VENOM’s most classic songs ever, ‘In League With Satan’, that gets a nice twist in the dirty and deep scars covered hands of the LORD OF PAGATHORN camp, making the song in question to sound like these 3 fellows would never get enough by playing some mighty VENOM songs. This song would make a great tribute for VENOM on some VENOM tribute album, no doubts. Oh, people should keep in mind that both of these 2 songs are made exclusively for this 7" release, so they will not be included for LORD OF PAGATHORN’s "Nekros Philia" debut album. So, once this 7" is gone, it’s gone forever (then go crying for it on eBay for a ridiculous price). 400 copies on black and only 100 copies on red is the availability for this, so if you snooze for a short moment, the chances are you may loose it completely. More about nekrophiliac thoughts and blaspheme arts at: www.lordofpagathorn.com, www.woodcutrecords.com