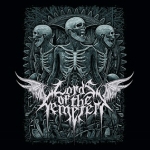 French Death Metallers LORDS OF THE CEMETERY’s first full-length "Citipati" is a little difficult to nail down. The duo of drummer Reno Cavadaski and L.C.F. (everything else) create an album of Death Metal riffs and growling vocals with a little Thrash and Progressive Metal thrown in for good measure. In fact, the album is a little all over the place. The cheesy ghoulish graveyard intro ‘Behind The Portal’ leads into ‘Eternal Dance Of Death’ and its labyrinthine riffs and snarling vocals. ‘Smiling Skeleton’ begins with a Dracula-esque organ and continues with a solid dose of old school Death Metal. But halfway through, a David Gilmour-inspired ‘Run Like Hell’ riff works its way in, echoing guitars and all. Sort of a head-scratcher. Just when you start feeling the Death Metal, they veer off in a completely different direction. The fourth track ‘Citipati’ edges sideways again for a few opening moments before blasting into a chaotic, pit-inducing headbanger, giving me faith that LORDS OF THE CEMETERY have the potential to kick me in the balls. But then ‘The Charnel Mask’, though not bad, simply chugs along at a levelled-off pace. It sounds like maybe it’s a production problem as I could see this as a better live experience. ‘Demonic Appearance’ sounds like something from the late 80s with its classic riffs and "trying to sound evil" vocals. ‘We Are Them’ brings it all back together with a full-furied shot of fist-pumping Metal. It meanders a little bit in the middle, but ends nicely. Overall, not a bad album. LORDS OF THE CEMETERY have the potential to write a solid album, but need more focus on consistency and getting to the point. More information at: www.facebook.com/lordsofthecemetery, www.greatdanerecs.com