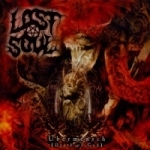 I praised this phenomenal band yesterday, and I can’t help to do just that now. “Scream Of The Mourning Star”, their precedent album, was already a fantastic slab of fresh sounding devilish Death Metal, but I was afraid LOST SOUL might have disbanded, since I heard no news from their camp for two years. Fortunately, here they are again, stronger than ever with this gem. Twelve tracks of uncompromising and relentless Death Metal that blows everything away! Honestly, I see LOST SOUL as a major contender for the crown of King of Death, so much this album shows intensity and musical mastery. All the tracks (discarding four short instrumentals and the song ‘Soul Hunger’) are played at frantic speed, but the remarkable production by Arek Malczewski especially underlines a surprising presence of melody for a so brutal release. Just listen to the mid part of ‘To The New Light!’ , you will hear a superbly executed guitar solo accompanied by crystalline keyboards and then you will grasp the essence of what “Übermensch” really is: brutality with a touch of finesse. Indeed, the use of keyboards add a lot to LOST SOUL music, they are more present now than before (when samples were rather employed), but never to the detriment of the overall raging fury LOST SOUL display so perfectly. Some parts of this release may evoke Black Metal atmospheres (some guitar harmonies even conjures the ghost of the mighty DISSECTION), let’s say LOST SOUL walk backwards the way another fantastic band like VESANIA (by the way, read Frank’s review about them, then buy their debut!!) march on, in the sense the former taint their Death Metal with a Black Metal touch, while the latter do quite the reverse. I wonder what could stop LOST SOUL’s crusade for total annihilation in the future, because they deserve nothing else than praises and pledges of allegiance. Poland is known for its vast reservoir of talented bands, but frankly LOST SOUL blow out the vast majority of their country mates (yes, even VADER) with this perfect new album, without speaking of their rivals elsewhere in the world who can seriously fear them! This review is already much too long I am afraid, because what can you say about perfection? Essential.