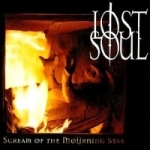 Not to be confused with LOST SOULS from Sweden, this four piece hails from Poland, the Wroclaw area to be precise. This is their first full length to my knowledge. As it is often the case with the Polish Death Metal bands, this one comes with a very strong debut. LOST SOUL offer us a highly original form of brutal Death Metal which escapes all kinds of easy classification. Once this disc is in your CD player, you are exposed to the blast of insane violence LOST SOUL unleash towards your eardrums, yet the music on display can’t be reduced to mere brutality. In fact, LOST SOUL throw a lot of unusual elements in their compositions, like twisted guitar licks, a touch of mystic keyboards here and there, and a rather unusual drumming speed, between Thrash pace and full blast. Lyrically, the band deals more with Luciferism than basic Satanism, as it is hinted by the album title (a word game, the “morning star” being Lucifer himself in the old tradition), so the lyrics end to be more abstract than plain graphic. The overall production sounds great, especially the drums gave the impression they are handled both by man and machine, that adding a very special touch to the ten tracks on offer here. As for the voice, expect a deep, brutal yet almost decipherable rendition. An essential album to any self respecting Death Metal fan, not to be missed!