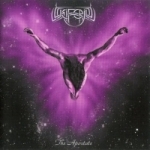 Bow down, you puny mortals… for “The Apostate” has arrived! What has happened? It was in 1995 when Death Metal went downhill that “Demonication – The Manifest”, the debut album of LUCIFERION was released. Clad in a very dry production in Studio Fredman, the listener became mesmerized by a brutal DEICIDE / MORBID ANGEL – ridden form of Death Metal on a high technical level (clearly the forerunner of modern Swedish Death Metal bands like THRONEAEON / GODHATE) This debut did also feature a devastating cover version of SODOM’s ‘Blasphemer’. Strangely enough, the band faded away afterwards. Now LUCIFERION returned and let me tell you that an hell of an album has been unleashed! Embedded and accompanied by dark keyboard sequences and samples conducted by Johan Lund, Wojtek Lisicki (who went on with LOST HORIZON during the break) and Michael Nicklasson (known from DARK TRANQUILITY) blast out ferocious and flawless tunes with absolute virtuosity, carried forth by Hans Nilsson’s (former drummer of LIERS IN WAIT, replacing album – drummer Peter Weiner from SARCAZM, if I remember correctly) drum barrage. The influences from the debut are still present (take “Blessed Are The Sick” and “Legion”) but carried to a new, higher level in terms of depth, musicality, brutality, speed and intensity. Wojteks hateful characteristic vocals are filled with more presence, the riffing is razorsharp and precise, leads, both insane and symphonic ones, are executed with perfection and the drumming is definitely top league. Also the keyboards are incorporated just perfectly – they even sound great in their powerful ‘Circle Of The Tyrants’ interpretation (gongs, choirs, timpani effects) – imagine that! Being a kind of concept album the song “The Apostate” is subdivided in six chapters or parts followed by three further connected compositions. Lacking the lyrics I cannot give you any more information about that side but taking a wild guess it may be about the liberation of spirit and belief from gods. At least the samples are taken from “Dark City” from Alex Proyas – if not you can call me Ottokar Toffel. The already mentioned CELTIC FROST cover then separates the new material from the added five songs taken from their 1994 “Demon”. Fellow filthmonger Thomas Westphal from NECROMANIC – Zine described it as “Morbid Angel on coke, just too much!”, hehe… at least this here is highly addictive and I do not see any middle grounds in this release – this is not rusty spikes and nails, this is cold, shining and massive Metal crafted with the purpose to devastate and prevail – Death Metal. Awesome! Live this must be Hell… hope we get to see them! Check out www.listenable.net for news and buy that unreal album at first sight. And until Frank conducts an in – depth interview with main man Wojtek Lisicki about “The Apostate” (which means the same as “Heretic”, by the way) you should check the interview in www.metal-rules.com, ok?