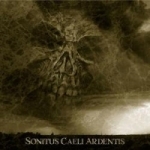 Again, this excellent Lithuanian label gives us some stuff of its own country, although this time it’s a split CD by two young bands. The first one formed in 2001 (LUCTUS) by only one member, which lives in Rome but hasn’t forgotten its country, and has in its live line-up members of bands like FUCK OFF AND DIE!, OSSASTORIUM, GODZERO, NAHASH, GHOULS, THRONE OF DECADENCE or ARS ONIRICA, with two albums and some demos before this. And the second one was formed in 2004 and starts with this CD. Both bands have slight touches that remind the East European Black Metal scene, and some Death Metal riffs too, but I will describe them now. Starting with LUCTUS, since the first moment there are some points that mark the listening. One is how melodic they sound, although dark, a bit like EMPEROR and DISSECTION, but faster and straighter; on the other side, there’s the drum sound, a bit "industrial". Altogether, if you can imagine it, we can say it reminds a bit of the first album of UK’s ANAAL NATHRAKH and a bit of French AD HOMINEM, because of how mad they sound, especially in fast parts, comparing them to both cases, and for some martial parts which remind of the French, although dissonant midpaced melodies are there too. The production is quite good too, a bit high perhaps, but it doesn’t lack in power, and the songs sound quite aggressive, with hatred vocals that give a lot of strength to the lyrics, which, as usual with bands of that country (or the ones I know), are about patriotism and war. Going to the second part of the split, Argharus are not so far from the sound of the first ones, but have some noticeable differences. First, the use a real drumkit, and that gives a different sound to the music, pero they still keep the speed. Their Black Metal is really melodic too, and uses dissonants riffs, but they play a bit more with heavy midpaced parts, and some depressive ones, and generally remind a bit less of the North European scene, they are not typical at all in fact. On their side, they speak about misanthropy and nihilism, and the vocals are not as high. And, as it’s starting to be usual with Ledo Takas, the CD, limited to 1313 copies, has a great artwork, with a twelve pages booklet full of drawings and the lyrics of the songs. So, this isn’t one of those shitty CDs you can find so easily. So, for the ones liking East European Black Metal, with Northern roots, this is a good fourty-six minutes CD. www.ledotakas.net