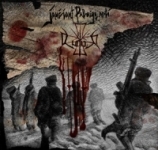 Formed in 2001, this one man band form Lithuania presents here their debut album, recorded with the help of session musicians, thus avoiding horrible programmed drums, which seems to be a part of their early discography. There is always something “exotic” with bands from this part of Europe singing, growling or screaming in their native tongue. The title of this album translated will be “feeling the end close”. According to their myspace bio, the band lyrics are about war, patriotism, nowadays decadence and the dying paganism. So far the sole band leader has moved and relocated to Italy. Now, let’s go to the music. The main core of the band is based on the kind of Swedish Black Metal performed by early MARDUK and early DARK FUNERAL, which might also serve as a primordial reference. There is also a very strong Deathrash influence roaming along, in the vein of SADUS, KREATOR and similar bands. That unholy mixture will be a certain primitive way of describing the sound of the band. To start with, the recording has an excellent balance, sounding quite organic and yet polished, but not as synthetic as to loosing that warmth that pro-tools takes away most of the time. The execution is also very good, and while the band keeps its direct most of the time, there are many killer riffs, rhythm changes and overall a omnipotent presence of power in all the songs. At times, this does reminded me to Czech heroes MASTERS HAMMER, quite probably due to the vocal delivery (in a quite similar way to that of Franta Storm), but also I sense a similar way of arranging, with a certain orchestral touch to it. The band plays usually in the fast region, and they do it with great mastery, without repeating themselves that much, and adding the right tempo changes when needed. What makes LUCTUS to rise above similar bands (STINY PLAMENU comes to mind as in that same style) is that the music has wisdom on merging the right amounts of intensity and melody with a wicked dark aura evolving the performance. This one is also an album that grows every time you listen to it, and is a definite riff festival in devotion to the darkside. I recall the essence that LUCTUS created to the one a band like AVENGER (from the Czech Republic) caused on me: this is a killer release, with great songs, fantastic riffs, and while not original in any sense, it feels like a new breath of demonic air. If you like Black / Death / Thrash Metal played with passion, intensity and that evil touch, look no further. A very strong debut album. www.myspace.com/luctus, www.ledotakas.net