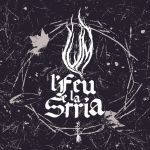 Italian Black Metal duo LUM’s first effort is a 5-track EP entitled “L’Feu E La Stria”. Featuring S on vocals and drums from one-man project THE GHOST GARDENER, and Khrura Abro on guitars, bass and keyboards from FERALIA, the band has a little history behind them which has led to their new effort. LUM sort of have that one-man band feel to them, which takes away from the overall openness of the sound. ‘…Aj Sun Le Masche’ opens with crackling fire (which honestly, I could listen to for an hour) and Gothic keyboards which could’ve been heard in an old Lon Chaney movie. ‘Canto Alla Luna’ enters the fray with thrumming guitars, lightning-quick drums and vocals which sound like anguished screams from inside a cave. The third track ‘Roca’dle Faie’ continues the same guitar sound, which sorta sounds like Black Metal surf music. Surprisingly that’s more common than it sounds. Unfortunately, there’s not alot of power behind the songs other than the vocals. ‘La Dansa “Fisica”‘ speeds things up a notch after the initial intro. But damn it if those same goddamn guitars don’t enter the mix. Sigh… At least things change up a little in the final track ‘La Veja…’ with chants and something that sounds like actual cowbells briefly. Honestly, LUM doesn’t offer much that might catch listeners’ attention. The EP’s fairly weak in delivery. They could use some variance in guitarmanship. But at the same time, the EP’s not terrible. Definitely room for growth. More info at: https://realmandritual.bandcamp.com, www.facebook.com/nigredorecords