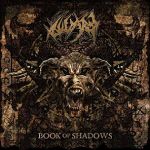 Released in 2015, LUVART’s two-song EP ‘Book Of Shadows" is a brief look at where this band from Brazil was heading after being around off and on since 1993. Brucolaques (guitar, vocals), Marbas (bass, keyboards) and Blood Devastator (drums) create a fairly simple and relaxed form of Black / Doom Metal that strays a little from other bands in their area which are more chaotic and aggressive generally. What we’ve normally come to expect from South American Black / Death Metal bands is a more energetic sound. LUVART, however, take a path in a different direction that honestly could use some livening up. Of course, with only two songs on "Book Of Shadows", it’s difficult to really form a full opinion on the band. I mean, EPs are like short stories which don’t necessarily have to deliver the same way a novel (or in this case, album) does. But the two songs presented are strikingly similar in droned-down tone. The first track ‘Under The Full Moon’ is a plodding, murky, shambling brute that never seems to change or evolve as the song stumbles on. Just when you think it’ll go in a different direction, it doesn’t. Unfortunately, the vocals and guitar follow the same exact pattern throughout, as if one feels the need to move with the other. Lyrically, it’s pretty much the same vibe. ‘Symbol Of Ignorance’ is practically the same style. Yes, it’s a MURDER RAPE cover, but maybe the band could’ve chosen something that knocks things up a notch. The guitars and drums stagger onward, much like track one, as bizarre, doomy laughs lag behind the molasses-like riffs. I’m not sure how much the listener will get out of this EP. Maybe the band was simply putting these songs out there which maybe didn’t fit on full-length "Rites Of The Ancient Cults" which was released a few months prior. Clocking in at only 12 minutes, it’s still almost a relief when the somber, snoozing EP finally gives up its ghost. For more information, check out www.instagram.com/luvartofficial, www.songsforsatan.com, www.misanthropic.com.br