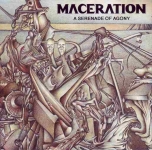 Hypothetical conservation in 1990 between Jacob Hansen and Jacob Schultz (both members of Danish Thrashers INVOCATOR): “Hey Dude, that Death Metal thing seems to become quite popular so let’s play some Death Metal besides INVOCATOR”, “Okay, that’s a great idea, but I don’t know much about Death Metal”, “Never mind, just let’s do it”, “Okay…” So MACERATION was founded by those two INVOCATOR members and they convinced Dan Swanö to do the vocals on the debut album “A Serenade Of Agony” (using the pseudonym Day Disyraah). Well, I absolutely appreciate the re-release of old, forgotten and long out of print underground jewels in a proper way. But I’m not sure if everything that was released in the early 90s truly deserves to be re-released. And “A Serenade Of Agony”, in my humble opinion, is such an album that would deserve to be forgotten. It is not an utterly shitty release but it’s also far away from being an essential or a good release. It’s just pure mediocrity early 90s US style Death Metal with lame and mediocre vocals…There is absolutely nothing you haven’t heard on hundreds of other albums before (already in 1992), especially MASSACRE is a big influence. It really sounds like a “we don’t have any ideas but let’s jump on the 90s Death Metal trend” release. The band released one further demo but changed their style to Groove Hardcore Metal. So…. Maybe I’m too harsh here and maybe if you are a diehard fan of early 90s US Death Metal you will enjoy this re-release more than I do, but I have to warn you about the “bonus” tracks. They added a couple of worthless live cover songs (MASSACRE, OBITUARY, DEATH), live tracks and rehearsal tracks which are nothing but annoying. Holy Jesus, I couldn’t stop laughing about the crappy vocals of that old demo track ‘Hideous Disfigurements’. So it’s up to you to decide if you prefer to invest your hard earned money in something superfluous such as “A Serenade Of Agony” or something truly outstanding such as the new DEAD CONGREGATION album (Hmm… even though I totally agree when it comes to the quality of the new DEAD CONGREGATION album, I can’t really understand the harsh words concerning MACERATION in general or "A Serenade Of Agony" in particular. Ok, the band definitely wasn’t original at all, but zillions of other Death Metal bands aren’t original either and still get praised. Death Metal is a very limited form of music, so it’s all just a matter of personal taste which bands you like and which you don’t like. MACERATION was only a side project, but at least the members knew how to handle their instruments and how to write some very cool old school Death Metal riffs in the vein of their main influences OBITUARY, DEATH or MASSACRE. And to me Dan Swanö never really sounded as good as a Death Metal vocalist as on this album. He sounds so brutal, that you hardly recognize him. The quality of the bonus tracks is of course rather poor, but hey – you’re getting them for free while buying this re-release, so no need to complain here. If there’s really something to complain about then it’s probably the shitty production of the album. The original release was already rather weak sounding and not even the remastering of this re-release made things any better, which is a crying shame! I bet "A Serenade Of Agony" would be a total crusher if Jacob Hansen would already have had his recording skills back when the album originally got recorded. At least Punishment 18 Records used the original cover art again for this re-release, because the one which got used in the second edition a couple of years back, and which is also included in the booklet here, looked way to Gothic for my taste… – Frank). More info and ordering details at www.punishment18records.com