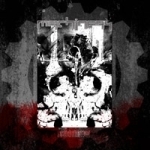 Sweden sweet Sweden… It’s somewhat incredible how the Swedish Metal scene can constantly produce such highly talented bands, just like these Swedish technical Power-Thrashers MACHINERY prove it so loud and clear. MACHINERY that consists of obviously five really motivated and pro-musicians, have recorded a really powerful debut album of theirs that truly stands out in its own merits – all the nine songs on it. Giving a careful listen to "Degeneration", there’s one band particularly that comes to mind – and that’s NEVERMORE. MACHINERY heavily trusts the power of guitars, and therefore all of their songs tend to be very riff-driven and groovy – the same way like NEVERMORE want to bring them out through their own albums. Even MACHINERY’s vocalist (and guitarist), Michel Isberg, churns his own vocal parts out almost in the same octaves like Warrel Dane does, without going to some of those highest vocal registers though. There’s also lots of different layers to be spotted out from MACHINERY’s sound; basically thanks to Fredrik’s well-crafted keyboard output for the songs that to say honestly give some more depth to them. At best MACHINERY tend to be in songs like ‘River Red’ and ‘Falling Through The Grid’ in which these fine Swedish Metallers sound heavier than a couple of dozens of sumo wrestlers in a heavily testosterone-filled action. Seems like they have paid an extra load of attention especially to the guitars’ massive and groovy sound on "Degeneration" because the guitar parts are truly the most dominating force of the whole instrumentation being presented in MACHINERY’s admirably powerful sound. It’s really damn hard to say anything negative about "Degeneration" simply because MACHINERY overall prove to be one awesomely superb Swedish Metal act that deserves each of our attention. So, do check them out – preferably even today (even if it’s not too late tomorrow either). http://machinery.se