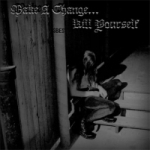 MAKE A CHANGE… KILL YOURSELF from Denmark released their self titled album a few months ago through Total Holocaust Records. Black Hate Productions recently released a 2LP version from this album with different artwork. There’s quite some mystery hanging over this band, not much information is given, but it’s clear that Ynleborgaz from ANGANTYR and HOLMGANG is the key-figure of MAKE A CHANGE… KILL YOURSELF. The album contains four songs, with a total playing-time of more than 70 minutes, the shortest track counts even over 13 minutes. Expect total darkness and depressiveness from MAKE A CHANGE… KILL YOURSELF. Suicidal melodies are repeating over and over again, mostly at steamroller-tempo, in-between those parts there’s some space for atmospherically ambient intermezzos with very sinister touches. Together with ice-cold hellish screams it becomes almost a suffer to listen this album; and in this context that can be seen positive. MAKE A CHANGE… KILL YOURSELF reminds me on slower songs of NARGAROTH, BURZUM and even SHINING. If you’re into these bands, than this album belongs in your collection, because Ynleborgaz succeeded in creating four stunning tracks directly from the deepest gates of hell. This is one of the absolute highlights in melancholic Black Metal released this year! www.blackhate.de