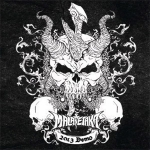 From the very depths of Malaysia, namely Kuala Lumpur, the four guys of MALAPETAKA are presenting their first demo. The name MALAPETAKA can be translated with the term ‘disaster’ or, to be more specific, this old Sanskrit word means ‘the resultant actions of greatly sinful activities’. Understood? The band is active since 2009 and honestly, I know almost nothing about the extreme Metal underground in countries like Malaysia or Indonesia. But for my ears this four-track (plus intro) piece of music is pretty weak. Musically definitely my cup of tea, this special melange of Thrash and Black Metal bands like SODOM (on their first releases) or DESASTER are known for. Accordingly some Death Metal riffs can be heard and especially the vocalist sounds like Glen Benton back on the first DEICDE releases. But the production is just a fail. Not the sound, I like rough sounding music. But the whole production / mix is blurred and indefinite. Here we got vocals, much too loud, drums vanishing somewhere in the background and the bass-guitar? There must be one, because a bass-player is listed in the line-up, but it is not audible. It is really sad, because in my opinion the good music is totally ruined by the desolate production. Although it is the bands first attempt to record at a professional studio, the result should have been better. In an interview I read that some guitar-tunes are based on traditional Malayan / Indonesian music and I must admit that my knowledge about that specific topic (traditional Malayan music) is non-existing. Sounds like a good idea, to mix-up Death Metal with traditional music, bands like NILE did that before. But even the most magnificent idea would have been ruined by this horrible sound mixing. Hopefully the band will be able to do better next time in the studio. www.facebook.com/malapetaka.kl, www.reverbnation.com/malapetakaofficial