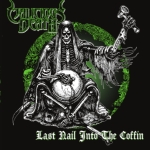 4 years have passed by since this Finnish old school Thrash Metal mob in question released the band’s 3rd album, titled "… From Above", introducing the band’s roots in both early European territory of Thrash as well as early American Thrash basically, spiced with some tiny hints of Hardcore Punk sound, which unquestionably has more or less been an essential part of MALICIOUS DEATH’s whole musical backbone. "Last Nail Into The Coffin" is the title of these furious Finnish Thrashers 4th studio album in order in 4 years – and I am secretly just hoping the actual title doesn’t suggest too much whether "Last Nail…" would be the band’s swansong for their career, spanning over 12 years. After spinning "Last Nail Into The Coffin" a few times back and forth, one thing can be observed right away. This time MALICIOUS DEATH’s Hardcore and Punk roots have clearly been brought to the forefront on this album more than ever before, which I personally happen to like very much, me always being a huge Hardcore Punk fan too. There’s no reason to start any name ridiculous dropping about all of those certain HC and Punk bands that have worked out as the strongest influences for these 4 Finnish horsemen of Thrash through their entire life; you only need to purchase this particular disc to find all that out for yourself. But then again, the main emphasis for MALICIOUS DEATH has always and naturally been on a fast, violent, furiously raging and straightforward Thrash Metal without any compromises made really. So has happened on the "Last Nail…" record as well: MALICIOUS DEATH come to our faces as ruthlessly and mercilessly as ever, beating us the way like it feels like a sweet favor from them to us, just only this time also having more diversity in their songs than any of their previous albums. The album’s been loaded with such pure 100% bullet-proof Thrash torpedoes such ‘Thrash Or Die’, ‘Satan’ and ‘ Suicide Solution’ – as well as more HC and Punk spirited outbursts as ‘Street Violence’, ‘Krustensblud’ and ‘Rotten To The Core’, which all work seamlessly yet so nicely together as a part of this well-crafted wholeness. Observing things a bit more from diversity’s aspect, it’s also nice to hear such a bit heavier streamrollers as ‘Life In Hell’ and the album’s title track as a part of this record. Especially in the last track ‘Last Nail Into The Coffin’ the chaps of MALICIOUS DEATH do surprise quite a bit (starting about at the 1:35min mark). On some certain scale it even feels like there’s an attempt from MALICIOUS DEATH to add some sort of ballad-ish type of momentum into this song in question, just for the sake of confusing some listeners quite a bit (which they indeed did, I can do nothing else but confess this as a fact). However, as a result of all things mentioned earlier, "Last Nail Into The Coffin" is without doubts the band’s most diverse, most enjoyable and best sounding effort thus far – and hopefully it won’t be their last one as the album title may misleadingly suggest. Well, time will obviously tell… An old smell of MALICIOUS DEATH is still present here: www.myspace.com/maliciousdeaththrush, label: www.disentertainment.com