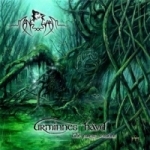 Many bands with a focus on heathen themes seem to be attracted by the idea of recording a pure folk-album at least once in their career. Examples range from now classics like “Kveldsanger” or “Nordavind” over similar efforts by acts such as FINNTROLL or SKYFORGER in recent times to the announced all-acoustic record by BORKNAGAR. So to mark their tenth-anniversary (and their departure from Displeased?) MANEGARM, whose last output “Vredens Tid” already featured some heavy folk-influences, decided to come up with such a special EP themselves. Brilliant decision, since “Urminnes Havd” easily ranks among the best releases of this kind I’ve heard so far and in my opinion even tops its quite impressive predecessor! First and foremost this is due to the fantastic female guest-vocals, courtesy of a certain Umer Mossige-Norheim (Jag älskar Sverige!). I spare you the name of the folk-act where she usually takes care of the vocals but I still remember an article about them (well, at least the pictures) in the sixth issue of the “Mörkeskye Mag” in which her voice was compared to that of THE THIRD AND THE MORTAL’s Kari Rueslatten. That is probably the biggest compliment these ugly trolls would ever give to any female vocalist and I can only agree with them. Another thing that strikes me about this record, which is once again graced with a nice Verwimp cover, is the varied song-writing. To many Metal-heads folk means more or less calm campfire-songs to lull the listener into sleep. But besides tracks like ‘Hemkomst’ or ‘Vaggvisa'(‘Lullaby’) which exactly fit that scheme, the “forest sessions” also include some pretty intense and vivid tracks like the powerful opener ‘Himmelsfursten’ or the jolly ‘Utfard’. Finally I have to mention the marvellous violin-player, who in the meantime has become a full member of the band and whose contribution is essential to the magic and beauty of this enchanting piece of music. So, once again MANEGARM delivered a fully convincing work which deserves recognition far beyond the realm of Metal. Han er skugvaktaren! www.manegarm.com, www.displeasedrecords.com