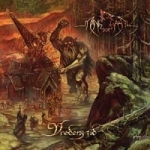 “Vredens Tid is a pure dedication to the wrath in every man and womans art…” – Yes, and DARKTHRONE is for all the evil in man. Despite the self-proclamation mentioned above the music of MANEGARM isn’t exactly what one would label as “christraping”, but some really powerful and refreshing Pagan Metal instead. What makes them stand out among the countless hordes of musicians who release albums under that monicker is the massive use of a violin which blends beautifully with the harsh guitars and at times even makes them sound like a darker and heavier version of SKYCLAD. The vocals range from raw, blackish rasps to a more heroic approach, including some male choirs here and there. And since the war against christianity can really get it out of you sometimes, MANEGARM often take a break for some nice acoustic interlude featuring a more prominent violin, sometimes enriched by female vocals of the better kind. If their was one thing I had to critizise, it would be the lack of variety, especially in the first half of the record. The songwriting seems to follow pretty much the same formula on the first songs, but the other half with epic tracks such as the marvellous ‘Hemfärd’ or the title track, as well as the all-acoustic final song easily make up for that. So, although not quite up to the standard of SKYFORGER or MOONSORROW, “Vredens Tid” is surely a decent offer and way ahead of all those retarded Hummpa Metal clowns. Horns up! www.manegarm.com