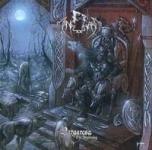 Well, this is not a new album of Swedish Viking Metal-act MANEGARM but a compilation of their early demos, which I suppose sound a lot different to the band’s today’s sound, otherwise I would not necessarily call this act Viking Metal at all. The first four songs, of which the original demo “Vargaresa” consisted, are rather typical mid-90s Swedish Black Metal, than anything else, well-performed with typical Swedish melodies, and especially ‘Hymn Till Vinternatt’ is certainly a good song. I don’t know in how much the sound on this disc varies from the original demotape – the info states that all songs have been remastered – but at least the drumsound is utter crap here. The fourth song of the debut demo already gave a hint at where the way would lead MANEGARM and so the second demo “Ur Nattvindar” (five songs incl. intro and outro) is far more in the vein of what we nowadays consider as Viking Metal in regards of harmonies, melodies or the use of violins, but however there is still typical Swedish Black Metal-ingredients as well. Especially the “Secrets Of The Black Arts”-era DARK FUNERAL-like drumming always gives you a hint where these guys come from. All in all, I must say that the second demo is not half as good as the first one, even if that was more typical. After the last song we still have this hidden track-nonsense, four minutes of silence and a live-recording of ‘Ett Gammelt Troll’ (if I am not mistaken, hidden tracks are never named of course), which is already the best song of the second demo. Since the cover artwork and the booklet are mentioned as a selling point by the label, I’d also like to comment on this as well: The cover drawn by Kris Verwimp is certainly good, although nothing outstanding, but the included original artworks would have – especially in the case of “Vargaresa” – definitely prevented me from buying that demo. And while a full load of crap collage work is taking four pages in the booklet, the original artworks (of which I doubt that they were square-sized anyway …) have a size of 2 inch per size, so that you’d rather use a magnifying glass to get some of the details. But as said the coverartwork of the first demo is crap anyway… Probably just a must-have for Manegarm-fans, I’d say and even in that case I’d rather go for the vinyl-version or the original first demotape if I find it somewhere for a reasonable price. www.manegarm.com; www.displeasedrecords.com