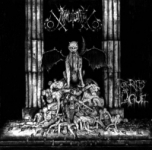 Three years have passed since the previous album of this atrocious creature called Manticore from Lakewood, Ohio, although they released a split EP with their warbrothers Morbosidad in 2005. For the ones who don’t know this combo of three blasphemous warriors, they play a kind of mix of old school Black and Death Metal (near what we use to call War Metal), in the vein of cult acts such as BLASPHEMY, ARCHGOAT or even some old CARCASS (or old Grindcore) vibes, what means: raw, dirty, fast and a bit chaotic riffs together with hellish vocals. After releasing a MCD and a full-length, which I liked a lot, one of the most interesting things here is that they achieved to have a good production, still a bit deep, without leaving the harshness of their previous efforts, maintaining their raw and chaotic sound, but managing to distinguish almost everything, which is not so obvious in this style and not so usual in the majority of bands who play it, all sounding more powerful than ever. Perhaps the drums should have been placed a bit more upfront, as they are really powerful but a bit hard to discern. Anyway, they still have darker passages, which remind me a bit of INCANTATION, which is not so strange if we think that their bassist played with those gods of Death Metal. On the lyrical side, they keep crushing anything holy on their path, with titles like ‘Liturgical Desecration’ or ‘Sodomy In The Womb Of Paradise’, and a great cover done by Eric Horrorval, which reminds me on the style of Chris Moyen, in black and white and a great booklet with all the lyrics and some pictures. Bleurgh! www.deathgasm.com