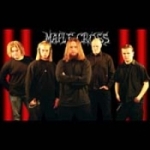 Swedeath from Finland with a recognizable Finnish touch: not too melodic, with sort of disharmonic (?) guitars culminating in a chorus that has this melodic melancholy reminding me of SENTENCED a lot. Mid paced with quite a hysteric singer one has to get used to first. The second song sounds a bit more original – unfortunately less interesting as I really can’t figure out the structure after listening to it several times and for some reason I don’t feel the energy to find out more. It’s simply not a song to catch one’s attention, sorry. The last song offers more drive but at this point the guitars start to get on my nerves as they’re all the time too much in the foreground. So the production doesn’t really support the songs, either. It really drowns my interest in MAPLE CROSS the first song had aroused. Song number 2 and 3 could have gained a lot with a more catchy chorus to balance out the fairly modern, disharmonic approach. The band would make it easier for the listener but maybe that’s not their aim after all? But in that case I have to ask: why? maplecross@surfeu.fi