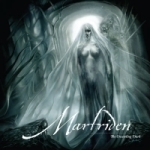 The warriors of modern Death are finally gone and EMPEROR’s throne is deserted so why not setting your sails to conquer this throne seems a maxim for a lot of bands these days. MARTRIDEN from Montana, America is a further ambitious band which has the potential to become a big number in further times but don’t believe in Candlelight’s promotion the band has nothing to do with bands like OPETH, ENSLAVED or BLOODBATH… I think that ZYKLON with their technical skills, aggression and technical coldness is much more fitting. "The Unsettling Dark" is MARTRIDEN’s debut (not counting the self-titled EP via Siege of Amida Records) and so not everything can completely convince but this is a band which tries to channel not only pure aggression but also other emotions through their music (just listen to ‘Ascension Part I’ and ‘II’). A very good release and I think with a little more finesse on their next release, the future seems bright for these 5 new warriors of modern Death. www.candlelightrecords.co.uk, www.martriden.com, www.myspace.com/martriden