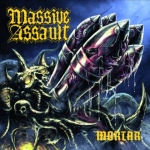 During the last years, there was a severe return of old fashioned Death Metal like it used to be played in the early 1990s. Many great new bands from all over the world came and still come out of the pits of hell to show the world how Death Metal was and still is meant to sound. The Dutch MASSIVE ASSAULT already did so in the beginning of the millennium and released two albums, a split 7” and two EPs since then. With “Mortar”, the four piece from Hoogeveen now unleashed their third strike, again on F.D.A. Records like the predecessor “Death Strike”. And just as the first two albums, this one presents a bunch of Death Metal tunes done the old fashioned way. Rooted in Dutch Death Metal, MASSIVE ASSAULT blend their heritage with elements of the Scandinavian and English school, creating a completely European sound. Pretty sure this means that “Mortar” is not an album that brings along something new. But on the other hand, MASSIVE ASSAULT deliver stuff of great quality that will for sure feed the needs of any connoisseur of straight Death Metal. Check the groove monster ‘Suffer In Terror’, the fast overkill ‘Extinction’ with its hints on SLAYER or the bashing ‘Frozen Hell’ that kills with alternating vocals in the chorus and you’ll understand. Anyone looking for quality stuff which always blows the mind will have fun with “Mortar”. Visit: www.facebook.com/massiveassault or www.fda-records.com