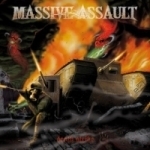 Well, I really liked the demos, the EP and the debut album "Dystopian Prophecies" by Dutch death machine MASSIVE ASSAULT, so I was rather excited when I heard they’ve done a new album. But while listening to it for the first time I was nothing but bored and stopped listening after a few songs. Fortunately I had to write this review so I forced myself to listen to it again and again and now I don’t know what the hell was wrong with me. "Death Strike" is a damned fine album and an excellent example how old fashioned straight forward Death Metal has to sound. I would describe it as a blend of early Swedish and early Dutch Death Metal mixed with some BOLT THROWER riffs and d-beat Crust elements. Sure, there are no innovations and nothing you haven’t heard before but "Death Strike" has a lot of power and definitely kicks ass. I also have to bring up, that the production is superb, everything sounds really powerful and all instruments are transparent. So if you like your Death Metal performed with passion and violence you should get your fingers on "Death Strike" rather soon.. This album is truly a massive assault!!! www.myspace.com/massiveassault, www.facebook.com/massiveassault, www.fda-records.com