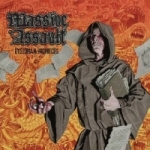 Yeah, Massive Assault, old school, Massive Assault, Death Metal! It’s old school time again and MASSIVE ASSAULT’s first full-length CD convinces in everything. Old school Death Metal in the vein of early ENTOMBED (the first 15 seconds in ‘Come With Me’ are a slight rip off of the opening sequence of ‘Left Hand Path’ if you ask me – in a positive way) and DISMEMBER with the groove of newer AT THE GATES when they were still alive. These are MASSIVE ASSAULT’s trademarks, delivered in an absolutely perfect sound and a layout which hardly could be better. This is not the most original formula in those current times as old school Death Metal is nothing special anymore, nevertheless what those 5 Dutchmen are doing on “Dystopian Prophecies” is above the average when comparing them to current old school releases. Next to influences from the mentioned bands a huge dose of Crustcore is included as well which is some kind of a necessity when talking about old school Swedish Death Metal – from the Netherlands, haha! 9 songs of Swedish Death Metal “bringing the old school back to life, devoted to Metal for life – reclaiming the crown of old school Death Metal” to quote from their song ‘O. S. D. M.’ (‘Old School Death Metal’), yes man, every man needs a target in life and this isn’t the worst one, haha. From my point of view they are still in a “little” distance from getting the crowned old school Death Metal kings, though they are on a good way and “Dystopian Prophecies” is a great and tight release which is professional from the beginning to its end. Get it either from www.crashlandingrecords.com or www.myspace.com/massiveassault. And remember: Massive Assault, old school, Massive Assault, Death Metal.