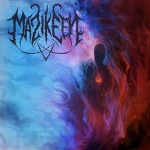 MAZIKEEN is a horde hailing from down under. Started in 2013 as a solo project, it somehow developed into a serious project and finally presents their first self-titled album via Iron, Blood And Death Corporation with the help of a bunch of guest musicians. The opener ‘Prolepsis’ starts slow but already spreads a freezing atmosphere with some screams. But it is more to be seen as an intro of what’s to come with ‘Autophobia’, which is a pretty nice melodic Black Metal song with influences from both, Sweden and Norway before turning in a CRADLE OF FILTH direction but with more Scandinavian rooted guitars. ‘Fractricide’ again has some strong CRADLE OF FILTH vibes and could easily have been included on one of their last outputs but not meant in a negative way, as fans of CRADLE OF FILTH would really love this song with its tempo and melodies. The incorporated keyboards are very well performed and show the quality and potential of this project. Worth to mention again are the blistering guitars which also could easily have fitted on a Norwegian Black Metal album. ‘Psychotic Reign’ goes in the same direction but lives from its piano melody in the background which has a little TYPE O NEGATIVE or even MY DYING BRIDE touch. Again a pretty strong song before increasing both speed and hardness in the end. The guitar and drum work is pretty fine again here. But the keys really make this song very memorable. ‘Harrowing Cessation’ is an instrumental interlude, which sounds like a horror film soundtrack playing on a dark and windy field or in a menacing dark port. ‘Cerulean Last Night’ sounds a bit more rough and could be an older track which already shows the direction of the other tracks of the album but in a rougher form, again with vocals, similar to the ones of Dani Filth but also some DISSECTION vibes appear in the vocals. The last track ‘Fear’ seems to be another older track with a rougher production but again showing the direction the project later continued with but with a strong DISSECTION vibe again in the guitars. It ends with a long keyboard section as epilogue. Summarizing my impressions, this project from down under has some pretty good songwriting skills and this compilation of their first steps is already on a good level and worth to check for fans of the above mentioned bands. I am curious to follow up their next steps. More info can be found here: www.facebook.com/mazikeenblackmetal, www.facebook.com/ibdc666