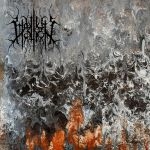 The second wave of Black Metal is still alive and doing well around the globe, here envisioned by the new Australian horde MAZIKEEN. Symphonic Black Metal with a healthy dose of DIMMU BORGIR inspiration, something that not only is shown in the music, but also with the cover version of ‘The Mourning Palace’ from the last good DIMMU BORGIR album “Enthrone Darkness Triumphant”. I was positively suprised along the waves of the first track ‘The Solace Of Death’, a great, quite catching Black Metal track with good melodies, nice synth work and good progression. Though as I got further into the album, my ears became tired. MAZIKEEN is really good when they do their music mid-tempo, when it becomes too fast-paced, it looses both energy and atmosphere, as things are blazing by, not making an impact, and they are very much fast-paced. Another thing that bother my ears, is the hired gun on drums. At first I thought the drums were programmed as they were delivered with an insanely speed at times, and the mix of the different drums were quite out of sync, with very much focus on the bass drums, weak sounding snare drum and very weak sounding cymbals. Though the answer was obvious, the good Marco Pitruzzella was of course the one to blame for the insane drumming. He is a blast beast, props up for that, though soulful drumming isn’t his speciality, and such is needed in Black Metal, on top of that the insane loud bass drum which are shattering a good deal of the tracks, and all four cover tracks on here, ‘Transilvanian Hunger’ and ‘Night Blood’ just don’t work with an empowering bass drum, I’m sorry lads, but I think Hellhammer will be pleased with the drum sound on ‘Freezing Moon’! There are some good moments on the album, some good music here and there, many good ideas, though much is shattered by the blasting and the drum sound and the space it has gotten in the final mix. Sometimes all you hear is drumming, synth and vocals, it just doesn’t work for me! www.facebook.com/mazikeenblackmetal, www.satanath.com, www.facebook.com/ibdc666