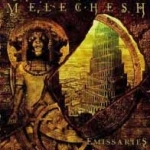 Bands of real importance are very rare these days. MELECHESH are one of them. Their previous offering, “Sphynx” showed a lot of talents and musical ambitions. Quite logically, “Emissaries” goes even further, redefining one’s perception of brutal Metal. It is not that the basic formula MELECHESH have made us accustomed by has radically changed on this; let’s rather say that the potentialities demonstrated before comes in full bloom on “Emissaries”. If we can deplore the departure of Proscriptor from the drum seat, his replacement by Xul appears a judicious one, so much the newcomer has obvious technical skills. The band experienced technical difficulties to obtain a satisfactory mixing (they had to go for a change of sound engineer), but the final result is outstanding; the general sound quality reaches the heroic size of the Babel tower depicted on the superb cover of the album. All the compositions have a sinuous, serpentine quality, because of the fact that all chords and notes are intertwined together, leaving not that much room for marked breaks, even if rhythm changes can be found aplenty here. Once again MELECHESH privilege oriental chord progressions, introduce some ethnic percussions and traditional Arabic male choirs within their frantic riffing fest. A really intense listening experience, “Emissaries” is surely a masterpiece of its own.