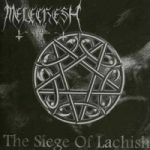 A ceremony of opposites: while MELECHESH just got signed to commercial powerhouse Nuclear Blast, Proscriptor McGovern of ABSU re-releases one of their first offerings, the "Siege Of Lachish" 7-inch on his very own Tarot label in a limited edition of 300 copies. The title track was also used in a refined version on their monumental "Djinn" album. According to the band, this was the first song carrying the unique trademarks that would later define their "Mesopotamian" brand of Metal. And indeed it’s got this unmistakable oriental feeling, created by the skilled incorporating of rhythmic elements not that usual in extreme Metal before. And although the drumming to be found on this earlier version is not exactly on par with the latter one in terms of complexity and craftsmanship (courtesy of none other than Mr. McGovern himself, who did the drums on "Djinn") it scores with some interesting keyboards that for some reason got skipped for the album recording and which add to the exotic atmosphere of this track quite a bit. If you’ve carefully read the news-section you should be informed about the lyrical contents of the song as well, if not, blow off your head in despair. The B-side offers a more typical piece of Black Metal called ‘Malek Al Nar’. Now don’t mistake typical for boring or generic, even in this more primal expression the class of these fine musicians simply cannot be denied and this short example certainly makes me curious about their earlier works. This nice little collector’s gem comes as a picture disc in thick, heavy vinyl and features an inlay card plus a sticker. Highly recommended! www.tarotproductions.com