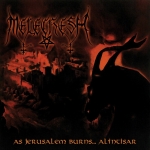 22 years after its original release, MELECHESH’s debut has been remastered and reissued (yes, once again), but this time by Vic Records, the very industrious label owned by veteran Metalhead Roel van Reijmersdal (of the Dutch Mortician / Numskull magazine fame, for those of you that may have lived the glorious printed ‘zines era) that has been releasing quite a lot of material lately. Now, I have to be honest here: even though I have "Djinn" and "Sphynx" in my CD collection, the truth is that, for some forgotten, and now unforgivable reason, I had always dismissed MELECHESH’s first album as a raw, amateurish record. All the Mesopotamian gods know how wrong I was. While the extreme Black Metal discharge delivered by the band on tracks such as ‘Baphomet’s Lust’, ‘Devil Night’ ‘Humn To Gibil’ or the opening track ‘Sultan Mschief’, may remind you of the endless blast beats and atmospheric mini-interludes found on almost every Black Metal classic from the early to mid 90s such as "Ugra Karma", "Vikinglig Veldi" or "In The Nightside Eclipse", to name a few. What really set them apart was the extensive use of Middle-Eastern musical elements, profusely present on both rhythm and melody in songs such as ‘Assyrian Spirit’, ‘The Sorcerers Of Melechesh’ and the mid-paced ‘Planetary Rites’, giving the band their particular sound signature. And don’t get me started on ‘Dance Of The Black Genii’, with its ritual chants and the abundance of ethnic minor percussion, you just wish you were bathed by moonlight whirling like a derviche on the top of the highest Sumerian ziggurat in Uruk or Ur, or in Babylon for that matter, facing the Euphrates, invoking one of the ancient Sumerian gods, or the Black Genii himself, mystically chanting to burn the three-religion city to the gound… Alas, poor Jerusalem! But the juicy part of this reissue is, of course, the addition of bonus stuff. Not only do we have the two tracks of the infamous "Siege Of Lachish" 7” EP, originally released by the obscure German label Devilish Music Propaganda on a limited edition of 666 copies (you guys expected more?), but also the rawest, most feral and untamed versions of some album songs directly remastered from the 1995 demo "As Jerusalem Burns…", which was recorded on a live session in the same studio where the band would record their debut album a year later. In retrospect, listening to this material feels like an audio testimony of MELECHESH’s early evolutionary stages, and it also gives you a hint or two on why a band from Jerusalem got signed by Breath Of Night Records, a Black Metal label from the US of A owned by JUDAS ISCARIOT mastermind Andrew Harris, a.k.a. Akhenaten. There you have it. If you happen to be one of those obsessive compulsive MELECHESH fans lucky enough to already have the previous reissues of this album, the bonus material on this one will surely seduce you. If you are a MELECHESH fan but, very much like me, never got ahold of this album, this is your chance to have it! And if you are only discovering this band… there is no reason why you should not buy this. Get it before Jerusalem burns once again! www.facebook.com/melechesh, www.vicrecords.com