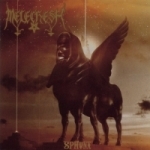 MELECHESH managed to impress me with their previous effort (“Djinn”), but it is nothing compared with this one. I am not afraid to say that “Sphynx” is an album of the most exceptional quality. Absolutely all is perfect regarding this release, be it the production (handled this time by Andy Larocque), to the visual concept, without forgetting the most important: the songwriting and the musical abilities the four members of MELECESH grace us with. Once again, the mighty Proscriptor (of ABSU fame of course) demonstrates how much a class drummer he is: far to be self indulgent, he puts his considerable skills in service of the whole band, in a humble manner so to speak, yet his performance is breathtaking. For those who don’t know the mighty MELECHESH yet, I believe it is useful to precise that the band originates from the Holy Land, but that founder member Ashmedi decided to relocate the band to Europe. He lives in Holland now, just as the bassist Al Hazred, while Moloch, the other guitarist, has settled his home in Paris, with Proscriptor still living in the USA. I don’t know in which conditions the recording process took place, but the result is more than convincing. MELECHESH is often categorized as a Black Metal band (while still in Jerusalem, the band used to wear corpsepaint, and played a rawer form of music) but it would be inaccurate to persist in such a vision of things. Like Frank stated in his review of “Djinn” MELECHESH play a blackened form of sophisticated Heavy Metal, with only the vocals tying them to the Black Metal side of things. As soon as the first track of “Sphynx” boomed out the speakers, the name MERCYFUL FATE sprang in my mind, confirming what Frank said in his own MELECHESH review. I guess such a comparison could give you a fair idea of what you could find of this release: not over complex but still very intricate songs, based on mysterious and occult atmospheres referring to a time long past and ancient civilizations buried under the desert sand. Ashmedi and Moloch guitar work shows a lot of finesse and a concern for carefully crafted arrangements; by the way Ashmedi have just been endorsed by the French guitar maker Vigier, I think the guitarists among our reader will understand what it means. The band included some traditional instruments from the Middle East to their music, but as far as I remember (unfortunately, I didn’t get “Djinn” yet) they are more discreetly used here than before (the instrumental piece ‘The Arrival Ritual’ being a good example of what you got, mixing modern and ancient forms of music, this track sounding almost like a film score). The lyrics are all based on the mystic and occult aspects of the Assyrian and Mesopotamian civilizations. It would be irrelevant to pick up a particular track out of the ten on offer here, how much together they made a consistent grandiose whole. Yet I would like to mention ‘Annunaki’s Golden Thrones’ as my personal favorite, especially for the epic final part, reminiscent of the LED ZEPPELIN classic song ‘Kashmir’. To sum it up, an essential release by a band out of the ordinary. Myself I feel honored to have had to review such an exceptional work.