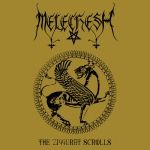 MELECHESH are a Black / Death / Folk Metal band and “The Ziggurat Scrolls”, originally released in 2004, is being re-presented by Vic Records with 3 additional tracks. Frankly this seems to be the best possible version of this EP. I particularly love the 98 Demo songs, they capture a raw energy woven with a relentless rhythmic attack from start to finish. From an output standpoint this seems to be the best time for the band as well. Granted, these would seem like your run of the mill Black Metal sonic attack but MELECHESH twist their delivery and only keep getting better. For example ‘Wardjinn’ is as straight forward as it gets, but the guitars assume such a phenomenal tone and the vocals suddenly shift to chats from growls. Now that’s just one part of it, changes like these keep the songs interesting and the band throws in plenty of variety with unusual stringed and percussion instruments from the Middle East. It’s amazing how well they entwine the subtlety of the acoustics with brutality. For comparison NILE has adopted the similar melodies more or less, but their delivery, if I may say, is a very westernised viewpoint. ‘Of Magick And Reptilians’ is the perfect example showcasing the spirit of Middle East rhythm mixing with Black Metal guitars. On the whole the highlight of the album has to be the drumming. Proscriptor is the man in charge and well that’s saying pretty much everything needed. On the whole fans of oriental angles in Metal music should definitely not miss this. For more information, please visit www.facebook.com/melechesh, www.facebook.com/vic-records-321130546025