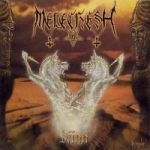 MELECHESH originally started out as a solo project of Melechesh Ashmedi (which should explain the rather strange band name) in Jerusalem (!!) in 1993. Over the years it has become a real band that recently relocated to the Netherlands and also features ABSU drummer Proscriptor in their line-up now. “Djinn” is already their second album (following their 1996 Breath Of Night / Pulverizer Records debut “As Jerusalem Burns… Al’ Intisar”) and is musically very hard to categorize. The band is somewhat close to MERCYFUL FATE in style (without really sounding like them), mainly due to a similar old Heavy Metal background, the weird rhythm changes and the overall Satanic / anti-Christian lyrical message. But while MERCYFUL FATE also go for a Heavy Metal tuning and kinda fat guitar sound, MELECHESH come across a lot more Black Metal – ish and cold sounding. And that’s also the main problem that I have with this disk. For a Black Metal release it simply lacks too much in aggression and the dark and eerie atmosphere and a pure Heavy Metal fan will probably have a tough time with the extreme vocals and straight ahead fast material. On the other hand, the partly incorporated unique oriental sounding melodies are pretty cool and should be expanded even more on future releases. So, all in all an interesting, yet not fully convincing album of a band we should certainly keep an eye on.