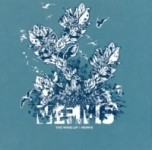 Ok, here is another new Swedish band full of energy and creativity. Founded in 2003 the band was voted “best unsigned band of the month” in Sweden’s Close-Up magazine and won the “band of the year” title by the P4 Dist radio-show. Hmm, I don’t know if this really has to say something for I neither know the magazine nor the radio-show but it gives you one hint: this band surely does not play Swedish old school Death Metal (too bad)! These guys bought some of the most popular albums that were released in the last four years, inhaled them, held their breath and blowed out in their rehearsal-room: thrashy like THE HAUNTED, progressive like BURST, melodic as MASTODON and smooth as OPETH. But MEMFIS do not just copy these bands (well, not that often) – they do have enough talent and creativity that I can imagine that a lot of fans of the afore mentioned bands could easily be affected by this four-piece for they are never too far away from those bands. I am not too sure here but the album seems to have all it needs in this genre – nothing more by now… but hey, it’s their debut! And a good one if you like this style of music – and I don’t think we really have much here among the Voices readers. Get some songs at www.memfis.net, www.dentalrecords.se.