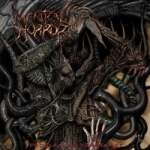 As soon as I saw an ad about the issuing of this album, I decided to buy it as fast as I could, hastily assuming that I would get something special because of my inclination towards extreme Brazilian stuff. I should have been wiser by postponing my decision, as "Proclaiming Vengeance" revealed itself to be a very derivative album to my ears. MENTAL HORROR can’t claim to be in the same league as acts like REBAELLIUN, KRISIUN, ABHORRENCE or NEPHASTH. In fact, I think the band overdo the brutality and the hyper-speed factors, with the result that all the songs on offer (discarding one intro, one outro, and three instrumental pieces) severely lack hooks and catchiness. I don’t see the point to play faster as one can while forgetting to let some room for rhythm variations and contrast. The paradox of this album is it is extremely brutal but has the same effect as a sleeping pill because of its monotony. All is not negative though, as the three musicians in action here know how to play (except for the horrid guitar leads, awful!), and I can only praise the performance of drummer Robles Dresch which is beyond belief. If only the production would have been better, I suppose "Proclaiming Vengeance" could have left a lasting impression, but unfortunately it is not the case, as the guitars are buried in the mix. and the uniformity of the vocal work (mainly low and undecipherable grunts and growls) doesn’t help either to figure out what it is going on here. Even if MENTAL HORROR could claim some longevity already, the fact that this material recorded in 2000 reach Europe only in 2002 give the impression they are followers rather than instigators, and that they arrive after the battle somehow. Yet I don’t think that all is lost in the MENTAL HORROR camp, all they have to do now is to refresh their song writing to come up with more striking material, because for now they only appear as a second rate version of KRISIUN. Not that bad, but not that good either. Note that the European version features two "bonuses", namely alternate mixes of two songs, where the vocals were allegedly redone, I would have preferred two new songs!