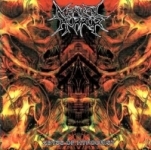 Death Metal bands from Brazil tend to play very fast, which is usually not a bad thing. MENTAL HORROR are from Brazil and after a split CD with QUEIRON and their first album "Proclaiming Vengeance" they have now released their second full-length opus, which is more than fast, it’s continuous lightspeed! In the info sheet, MENTAL HORROR are advertised for playing "…(some of) the most insane, brutal, chaotic and apocalyptic extreme Death Metal ever heard." I agree in a few points, they are definitely brutal and extreme, but above all they are CHAOTIC! Except for three acoustic instrumentals, this album sounds like one massive 50 minutes blastbeat, lacking any concise breaks or structure. To make things worse, the sound turns out to be blurry and especially the hyperblast drums are not loud enough. Both vocals and riffing become monotonous after two or three songs and the few cool riffs are pushed aside by the blastbeat inferno. These guys are excellent musicians for sure, but maybe they should reduce their speedmania every now and then to give the listener a chance to follow the songs.To put it in a nutshell, I think only extreme hyperspeed enthusiasts might enjoy this hellride, others might just be bored. For further information consult the label’s webpage www.displeasedrecords.com or the band’s homepage www.mentalhorror.cjb.net if you understand Portuguese, the English version wouldn’t work.