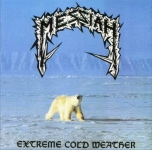 Here we have the historic second album of Swiss MESSIAH. They are usually thought of as a Death / Thrash band (even the intro to the second track states this denomination clearly) but these early releases clearly belong to a time in which there was no real concern about these tags, later much more rigidly defined. This album will sound somewhat amateurish and primitive these days, but it is a portrait of a time in which the spirit of Metal was wild and rebellious and unlike any other music… and in that perspective this is top. There is a lot of Heavy Metal here, and a lot of the blackened attitude (80s meaning of the term, obviously) that was to be found in the debut "Hymn To Abramelin" (an Egyptian mage from the 14th/15th century). I have always much enjoyed this sort of early output including this particular album, warts and all. And there are numerous warts that just add up to the whole atmosphere. It all begins with the blowing wind that evokes the title and the cover artwork (which I have always found rather goofy, a photo of a polar bear under a much too sunny landscape of ice) and goes on with almost joke-like lyrics about how cold it is (“With all my long hair, I don’t need a hat to wear”). The music flows with moments of much melody, including clean guitar work and keyboards. The second track, ‘Enjoy Yourself’ begins with circus music and a carnival barker calling passers-by (with an atrocious accent). Soon he reveals himself to be none other than Abramelin… right before the eruption of an aggressive song against violence in concerts, and since we’re on the subject also against racism, the arms race and vivisection. All of this sounds priceless to my ears, pretty much unique in its unexpectedness, and it confers great musical personality to the album. It is not another typical Death Metal album at all… the circus dude could call out "come and be surprised!" because if you’re willing to give this album the attention it deserves you’ll surely enjoy yourself at least from the "what the fuck" moments. Truth is, as I mentioned, I love the music as well. The youth, the guts, the cramming of all this stuff into their work, and the effort in doing actual music amid the brutality. Even with the clumsiness that becomes apparent here and there; for instance in the more aggressive ‘Johannes Paul der Letzte (Dedicated In Hate To Pope John Paul II)’ with its dissonant musical interludes and chaotic solo. After a couple of instrumental songs we have the anti-militaristic ‘We Hate To Be In The Army Now’ (certainly a reference to the STATUS QUO song from the previous year) and then we have the closing ‘Nero’, about the despotic emperor or Rome, which is perhaps the more consistently thrashing song of the album. After all this comes the "live" side of the LP, with a number of recordings including some songs off "Hymn To Abramelin". The sound quality is quite good for the time and conveys a vigorous live performance. The fact that there is so much live material, lengthier in time than the total of studio songs, adds a bit to the already settled amateurish feel. This, however, is a part of MESSIAH’s early image and appeal. Provided you don’t mind a bit of silliness and chaos in your old school Metal gems, this is certainly an album to go back to. For a trip to the past, visit www.facebook.com/messiahthrashingmadness, www.hrrecords.de