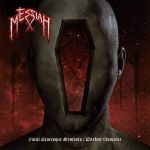 Switzerland’s Death / Thrash mongers MESSIAH return after a lengthy 26-year absence from releasing new material with a new 3 song EP that is sure to set the pace for their upcoming full-length album “Fracmont” (release date in Sept 2020 via High Roller Records). The band has been around since the early 1980s cranking out some choice cuts of Thrash that gave some of the German Thrash acts a run for their money. The band did take a break and reunited in 2017 but they kept the essence of the band’s work. So, let’s dive into this EP and see what these guys have churned out. Starting things off is the title track ‘Fatal Grotesque Symbols – Darken Universe’ a thrashy speedy song with drums really standing out as the driving force. The vocals, while good, do leave something to be desired. This is a catchy track that will get your head banging with its songwriting and guitars providing the attack. Not bad at all and a good way to start off the EP. Next up is ‘Space Invaders’ (a re-recorded version of the track from their 1986 debut full length “Hymn To Abramelin” – Frank), which takes things to a more downtrodden path with its doom-ish like guitars which changes gears from slow to mid-tempo. I really dug the guitar solo close to the three-minute mark which gave the song a bent halo. Out of the three songs this one was my least liked but that is more because I expecting more of a faster tempo. The last track is ‘Extreme Cold Weather’ (another re-recording, this time the title track from their second album – Frank), which to me really brought out the best of the band on this effort. The music jumped from thrashy to melodic and back to thrashy. The guitar work here was really outstanding and the solos shine. The drums were on point, the vocals were solid, the guitars (well this whole EP the guitars were great) and the melodic parts really shaped this song eloquently. This one really caught my ear and was my favorite of the three songs on this EP. These guys picked up right where they left off and have spun out a very good set of jams on this EP. Thrashy, good production, guitar solos accentuated the songs, and worthy of a spin on anyone’s record player. If this is an appetizer for what is expected from the full length in September then I think everyone will really be in for a treat. For more info: www.facebook.com/messiahthrashingmadness, www.hrrecords.de