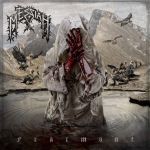 “Fracmont” is the sixth full length album by the legendary Swiss Death / Thrash Metal band MESSIAH. The album will be officially released in September 2020 by the German label High Roller Records. You know, MESSIAH was formed in 1984 and this is their first studio album in 26 years. I have to admit that I’ve looked forward to listening to this release, since I’m a fan of their early works, but unfortunately the result doesn’t entirely convince me. Here we have ten new songs for almost 50 minutes of overproduced Death / Thrash Metal; an album recorded by the same line-up that released “Rotten In Perish” in 1994. The lyrics deal with faith, religion, anti-christianity, history etc. An extra point goes to the front cover: a very impressive piece of creepy art, able to create a freezing and disturbing atmosphere. The first thing that I don’t like about “Fracmont” is the production: too polished and patinated for my ears. From the comeback of an old school band I would have expected a sound closer to the past, but this is not the case. The second thing that disappointed me is the widespread use of modern and sloppy riffing in the guitar work, something that clashes with the old school vibe of some parts (especially with the more Death Metal and Thrash Metal oriented galloping accelerations). The drums are solid and boasts some interesting arrangements in terms of double bass. Then we have the typical MESSIAH vocals inspired by DEATH: raucous and aggressive growlings, not particularly low but quite effective. In conclusion, I don’t really like this mixture of old and modern: I would have preferred a formula more in the vein of their classic albums from the ’80s and the ’90s (simple and chaotic Death / Thrash to the bone). “Fracmont” sounds like the lost opportunity to celebrate the comeback of a great band from the past. If you’re new to MESSIAH, “Hymn To Abramelin”, “Psychomorphia” and “Choir Of Horrors” would be a better start to approach their discography. More info you will find at www.facebook.com/messiahthrashingmadness or www.hrrecords.de