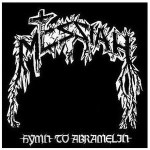 The story of legendary Swiss Thrashers MESSIAH is one full of misunderstandings and underestimation, at least the early days of the band. Started in the middle of the 1980s, the band soon released three demos that led to a deal with the up and coming, yet never really starting label Chainsaw Murder in 1986. The result of this collaboration was an album called “Hymn To Abramelin” that rose some dust in the underground. MESSIAH played a very extreme style of Thrash, based on the work of their country mates HELLHAMMER / CELTIC FROST and bands like BATHORY, DEATH in their demo days and SLAUGHTER. Nowadays the album is concerned to be proto Death Metal, but back in the times critics weren’t that well, since MESSIAH were neither ambitious nor difficult, but too extreme. It was just the same old story of a band that was ahead of their time. Even yours truly didn’t really understand the importance of “Hymn To Abramelin” right away, but needed a second chance. Yet, I liked the album somehow, despite the strange idea of the spoken word intros and interludes. These wise words run like a common thread through the album, culminating in the final Shakespeare quote: “The rest is silence”. But before that silence, MESSIAH put nine songs that helped to define extreme Metal, especially when you take a look at the album in retrospect. The album starts off with the intro piece ‘Hymn To Abramelin’ that paves the way for the band anthem ‘Messiah’, a thrashing anthem with a perverse slow break in the chorus. With the following ‘Anarchus’, MESSIAH show what utmost extremely thrashing could mean, especially in the context of the time it was recorded. Again this one has perverse breaks and a distinct influence of the extremest Punk back then in the fastest part. In these moments, there was the dawning of Grindcore already visible. On the other hand, the perverse slow moments in the breaks and the final part lead the way to the first doomy and creepy monster of the album. ‘Space Invaders’ was an overall slow grinder with an outbreak of full speed Thrash that hit the listener out of the blue. The first side ended with the perfectly titled instrumental ‘Thrashing Madness’. The mid paced opener of the B-side, ‘Future Agressor’, picked up some lyrical ideas of ‘Space Invaders’. There even was a kind of hit on “Hymn To Abramelin” with ‘Empire Of The Damned’, that has an extremely catchy chorus part and a brisk basic beat. With ‘Total Maniac’, we have the complete opposite here, for this ultra malicious song is so damn viscous and psychotic that it became my personal favourite track on the album. The final eight minute monster ‘The Dentist’ sums up the whole album, putting all the different shades of the album into one complex song. This is the very debonair result of a band trying to play a progressive song without the usual technical skills that were maybe needed. And it’s the end of a still outstanding album. For all of you who still don’t know this album yet, the always dedicated label High Roller Records made it available again. Asides from some different new vinyl editions of the original album, there is also a CD version of “Hymn To Abramelin”. This one features not only the original version of the album, but also the remix that was done in 1990. Originally, this mix was made for the CD version of the a little poorer second MESSIAH album “Extreme Cold Weather” that featured not only the studio tracks of that album, but also all the songs from “Hymn To Abramelin”. The problem, at least to me, was the fact that they were not only re-mixed, somehow destroying the charmingly imperfect original mix, but also all the spoken word pieces were left as well. In my humble opinion, this remix was not only unnecessary back then but it still is today. But there’s always a second opinion, so maybe there’s someone out there who thinks that it is the ultimate version of “Hymn To Abramelin”. At least this historically important and still damn great album is available again for anyone interested, so visit www.facebook.com/messiahthrashingmadness or www.hrrecords.de