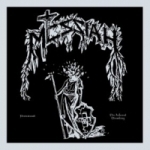 All those of you who thought they would already own the entire MESSIAH recordings from the band’s early days after they had purchased the Massacre Records re-releases of “Hymn To Abramelin” and “Extreme Cold Weather” might be suprised to find out that they also need this one in order to have their collection complete. Yes, I know that the “Powertrash” (no spelling error here!) and “The Infernal Thrashing” demos were already included as bonus material on “Extreme Cold Weather”, but they were incomplete on that one! So, this release finally offers both classic demos in their entirety, which means the eight songs (+ intro) from “Powertrash” as well as the six songs from “The Infernal Thrashing”. The booklet features lots of old pictures, but unfortunately no further info, but instead comes up with a cool looking silver / black sleeve design. To me MESSIAH never really managed to recapture the unique intensity of these early days on past “Extreme Cold Weather” releases and therefore my interest in them rather quickly started to vanish. The death-thrashin’ mixture of highspeed und ultra doomy passages simply worked out extremely well and there’s no doubt that Tschösi’s insane vocal delivery will always stand the test of time! Even after so many years he’s still easily recognizable among thousands of Death, Thrash or Black Metal vocalists. Imagewise also the grim looks of those days (obviously heavily inspired by the classic HELLHAMMER rehearsal pics) got dropped, which was kinda sad as well as it perfectly fitted the band’s whole concept. But anyway, if you’d like to go back in time in order to check out the material that started it all there’s definitely no way around this great release here! For all further info read Wannes’ impressive review on the album’s re-releases above or head to www.iron-pegasus.com