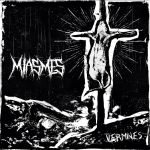 As a Black Metal devotee, every time I look forward to the debut of a band, I search for three things: good artwork, good lyrics and that the concepts involving the developing of the music are coherent. MIASMES has the three requirements mentioned above. MIASMES is a trio from France, formed in 2021, that has released their debut as an EP via Les Acteurs De L’Ombre Productions, entitled “Vermines”. It has 5 songs, with one term to name each one of them and all are written in French. The cover art is a crucified rat in a monocromatic color, a simple and well done image that instantly lets the audience know that the ideology of the band is ideal for creating Black Metal, spreading a misanthropic knowledge in a simple and interesting way. The band members are not new in this genre, they all have a baggage (for example, the vocalist and bassist used to play live for ANTAEUS) to know how to sound, with an influence that reaches the French Black Metal and the Scandinavian Black Metal scene of the 90s mixed with dirty punk. “Vermines” had been recorded live, without metronome and edition, having as a result, a really good and raw sound, better than other overproduced bands. The bass, the guitar and the drums have their own presence, easily to be distinguished and with a distance between each instrument that takes the listener to a journey of insolent Black Metal. The opening track is ‘Apostasie’, a song that despite the choruses used acrossed it, delivers a sound of how a band that makes its debut should sound. I think it is the weakest of all the tracks. ‘Pestilence’ is the second one, and here I heard some influence of Sweden’s CRAFT. The riffs are mobster, dirty, insolents and raw. The 6:28 minutes of ‘Apostasie’ are structured in a way where the changes of tempos are executed in an excellent way, there isn’t any second that exceeds or shall be erased. There is a lot of coherence, it’s not a soup of riffs. ‘Désolation’ is the next one, where a DARKTHRONE sound rises from above. The drums are brilliant, the use of the cymbals and double pedal surrounds the other instruments in a magnificent way. The vocals are also something that you must put attention to, having presence in moments where they shall appear, without invading the development of the song. These are the advantages of having as a singer a musician that knows how to barf or vomit in the necessary moments. ‘Furie’ is the fourth composition and the best one for the whole EP. The way the drums are played and some riffs, made me think of early 1349, an holocaust of darkness, speed and brutality. This one is the reason why I would order “Vermines” from Les Acteurs De L’Ombre Productions. ‘Vermines’ concludes this EP, with 4:08 minutes that every new band wants to create and very few manage to achieve. The drums are brilliant, what a fantastic drummer. If you are tired of listening to new bands because they don’t offer anything new, you should listen to MIASMES. More info at www.facebook.com/miasmesofficial, www.facebook.com/ladloproductions